The North Pine Trades Guild ("the Guild") was established at a public meeting in 1997, at the request of a community committee of the Pine Rivers Shire Council, known as the North Pine Country Park Board. There was a rapid building program being undertaken within the Park at the time, and there was a need for a community workshop to accommodate retired tradespersons and other interested persons, to assist with the building, and to pass on their skills to the public. The workshop was constructed by the then members on a voluntary basis, with a grant of $30000 from Pine Rivers Shire Council for materials and subcontractors. It was officially opened on 22nd February 1998 by mayor Yvonne Chapman. It was designed specifically so that it would not be hot to work in, and a feature of the construction is the double roof supported by trusses fabricated on site by the members. 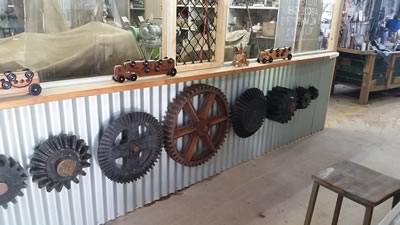 The North Pine Country Historical Village is many hectares in size and includes Main Street with a bank, courthouse, store, bakehouse, cell block and public toilets. There are also three cylindrical concrete time capsules and the original homestead's driveway which is lined with mature pine trees. Petrie Street, Griffin Avenue, Whiteside Street and Kirriwian Lane with Todd's Cottage and an old school room add to the colonial charm. All the relocated buildings, except for the bank, are weatherboard with iron gable roofs and sit on timber stumps. The bank is weatherboard but has a timber shingle gable roof with the front verandah roof at a lower pitch. The courthouse has a front verandah with a skillion corrugated iron roof and the store has a corrugated iron street awning with a front parapet wall. The bakehouse has a corrugated iron street awning with decorative timber bargeboards to the front gable and a lean-to structure on the northern side. Visit a real blacksmith, see steam engines or browse art, pottery, craftwork, clothing and plants at the market held here on Sundays. There are Shetland ponies, mini jeep, horse and buggy rides or farm animals at the resident farm.

The North Pine Country Park was originally part of the Griffin's Whiteside Run. The land was selected by James Foreman in 1868 and his original dwelling is the residence of the current park caretaker. The land was subsequently purchased by the Hyde family and they continued to farm the land until it was acquired by the council in 1985 Opening Times Open 6am-6pm daily